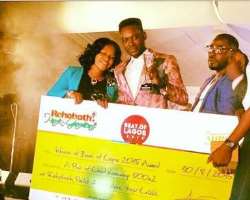 The Beat of Lagos concert  debuted few years ago and  boast of 4 massive concerts  between 2011- 2015  that enjoyed performances from the who is who in the entertainment industry from p square, Tuface, M.I , Jesse jags, Wande coal, Skales, Davido, Tiwa Savage, Mavin crew, solidstar, vector, Burna boy, Eldee, Dr sid, Illbliss, Chidinma, Wizkid , Ay, olamide, phyno, Iyanya, Dammykrane, Yemi Alade, Flowsick, Lynnx to mention but a few. The beat of Lagos” concert provides an atmosphere for networking and also serves as a timeout to celebrate entertainment icons and songs that has kept us dancing the year round.

The concert accommodates a minimum of 3,000 physical crowd yearly . “Beat of Lagos Award” was introduced at the 2014 edition and endorsed by the Lagos state Government  while the Mavin crew won the award for their song Dorobucci.The 2015 award went a notch higher by rewarding the winner Adekunle Gold for the hit song Sade with a plot of land at the Lekki free trade zone courtesy of Adron Homes.

According to the CEO of Motbensonz ; Toye Benson , With 2016 making 5 years of the concert we would be putting together a musical showcasing all the great songs that have rocked the city in the last 5 years and also appreciate the brains behind them. We have decided to celebrate the 5th anniversary of the concert series with an open Air Carnival  showcasing the lifestyle and Sounds the city has enjoyed  so far. The event is refreshed by coca cola and brought to you in association with One lagos, Glenfiddich, Diamond bank, Etisalat, Adron homes and nelson jack. The event will hold at the Muri Okunola park october on the 9th of October and the gate opens at 2pm . Music lovers can vote for their favourite song this year via www.beatoflagos.com . Or by sending a text to 08176376786

The winner of the award will also go home with a plot of Land.

> Tickets would be available at cold stone and domino outlets and online at www.ariiyatickets.com