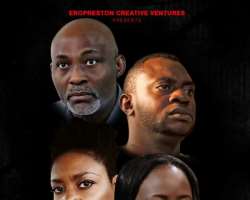 The award-winning Yoruba actor, Odunlade Adekola is set to make his first appearance in a Nollywood English scripted movie, “The Grudge”.

For Odunlade Adekola, it's another opportunity for the star actor to cement his place in the industry. He is arguably the best Yoruba actor in the last couple of years as he is known for his versatility and dexterity, traits which has endeared him to the hearts of many movie enthusiasts in and out of the country.