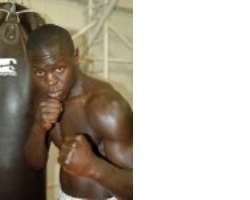 This coming Friday, Stoke Newington's rising Light Middleweight star Erick 'The Eagle' Ochieng is back in action on the under card of the Sky television broadcast, Frank Maloney promoted, British Flyweight title clash between Shinny Bayaar and Ashley Sexton at the Goresbrook Leisure Centre, Dagenham, Essex.

In his last fight, back in January, Ochieng decisively stopped Plymouth's Jon Harrison at the Brentwood Centre in Brentwood, Essex. Harrison fought hard and tried all that he could to stop the stylish Ochieng from utilising his fight plan. Ochieng was patient though, constantly working away on Harrison's body until the opportunity arose to finish him off with a beautiful left hook in the second round.

For his upcoming fight Ochieng will be facing Nottingham's prospect Curtis Valentine. This exciting fight has an extra frisson as both Ochieng and Valentine are currently unbeaten.

Following some sparring at Johnny Eames' Ultrachem TKO Boxing Gym in Canning Town, London, under the watchful eyes of his trainer/manager Brian Lawrence, a relaxed and smiling Ochieng spoke of his preparations for the upcoming clash with Valentine. “I'm looking forward to Friday, I've been training hard and I'm in good shape.

I've sparred some very good fighters. I have far more experience than my fight record shows. You know, I sparred Darren Barker and I've been to Belgium to spar 'Sugar Jackson' Osei Bonsu, you know, these are World class fighters and the experience of sparring with them has bought me on more. I'm confident, I'm more experienced and I'm confident I will win the fight.”

Erick 'The Eagle' Ochieng versus Curtis Valentine is on the under card of the BBBofC British Flyweight title clash between Shinny Bayaar and Ashley Sexton at the Goresbrook Leisure Centre, Dagenham, Essex on Friday 14th May 2010.

Co-feature on the Frank Maloney promoted event is the Heavyweight battle between Larry Olumbamiwo and Colin Kenna for the vacant BBBofC Southern Area Title.

Also featured on the stacked under card are, at Welterweight, Martin Welsh against William Warburton and Scott Woolford versus Scott Haywood. At Heavyweight David Price against Daniil Peretyatko and Tom Dallas versus Lee Swaby.

In another battle of the unbeaten Travis Dickinson takes on Menay Edwards at Light Heavyweight . Also on the card will be Featherweight super star Akaash “Ash The Bash” Bhatia whose opponent has yet to be confirmed