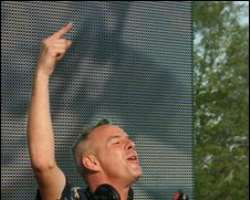 Superstar DJ Fatboy Slim will fly into Northern Ireland on Saturday to perform to thousands of fans.

The DJ, real name Norman Cook, will make history as the first artist to perform a concert at Giant's Park in north Belfast.

Promoters said the event is the biggest concert in NI since U2's Popmart gig in Botanic Park in 1997.

The laser lights being used will be visible from as far away as Scotland and the Isle of Man.

The police have said they are keen for the concert to go ahead with as little disruption to the local community as possible.

There may be traffic disruptions in the Dargan Road and Giant's Park area, and concert goers have been advised to arrive early and use the public transport laid on by the organisers.

“I want everybody to have a fantastic time and enjoy this wonderful event to the full,” said Chief Inspector Ian Campbell.

“So don't spoil it for yourself and your friends by trying to smuggle in alcohol and drugs. You can freely buy alcohol at the bar as long as you are over 18.

“As for drugs, police and the organisers are determined to keep them out of this event. If caught, you may well end up with a criminal record.”