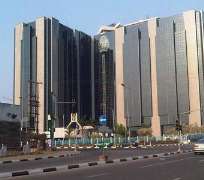 The country's external reserves have been depleted by $1bn in the last five weeks, latest statistics from the Central Bank of Nigeria have showed.

This follows the CBN's almost daily intervention at the interbank/official foreign exchange market in recent weeks, as chronic dollar shortage continues to weigh on the economy.

In its efforts to defend the naira and prevent it from falling further at the official interbank market, the central bank has been selling dollars at the interbank market more frequently.

The naira had fallen to an all-time low of 365.25 to the dollar at the interbank market on August 18 before making a gradual recovery. On Friday, the local currency closed at 310.64 against the greenback.

At the parallel market, the naira, which has been under persistent pressure, closed at 424 to the dollar on Friday.

Year-on-year, the reserves have fallen by 18.9 per cent.

The CBN had on June 20 lifted its 16-month-old currency controls and auctioned about $4bn on the spot and futures market to clear a backlog of dollar demand, to help boost interbank market trading.

The global plunge in oil prices has caused the reserves to be depleting very fast. The development had forced the CBN to introduce foreign exchange controls, which were abandoned in June.

The CBN's Monetary Policy Committee announced plans to adopt a flexible exchange rate policy after the external reserves fell to $26.56bn on May 23.

The external reserves have so far lost over $2bn this year.

The nation recorded a balance of payments deficit of 1.4 per cent in its Gross Domestic Product at the end of 2015 owing largely to its first current account deficit (three per cent of the GDP) in over a decade.

The nation's external reserves reduced by $6.7bn within a period of 21 months, the Minister of Budget and National Planning, Senator Udo Udoma, said on March 23.

However, the foreign exchange reserves increased by $595m to hit a one-month high of $26.196bn, the CBN data showed on Monday.

The reserves declined from $26bn on August 4, 2016 to $25.97bn on August 5 as the CBN stepped up dollar sales to boost liquidity at the interbank market and support the ailing naira.

The central bank has been selling dollars regularly at the interbank market to prop up the naira since it floated it on June 20.