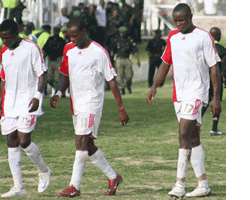 Heartland players
Heartland's chief tactician, Kelechi Emeteole, is confident that South Africa's champion, Super Sports United, will crash out of this year's CAF Champions League at the end of tomorrow's decisive encounter billed for the Dan Anyiam Stadium in Owerri.

Both sides settled for 1-1 draw a fortnight ago in Pretoria, in the first leg of the last round fixtures before the money-spinning group phase.

Going into tomorrow's return leg with the advantage of away goal rule, Heartland only needs a goalless draw to dump out the South African side from the prestigious championship. But Emeteole told Saturday Sunsports that his team would attack the South Africa's champion from the blast of the whistle till the end of the encounter.

'We have learned from our experience against Tiko United of Cameroon where we almost lost at home after an impressive 2-2 draw in Douala. This time, I have instructed my players not to be complacent because we got a good result in the first leg in South Africa,' he stated in a telephone chat early in the week ahead of tomorrow's clash.

'I must punish the coach of Super Sports for his uncomplimentary comment about my team after the first leg encounter in South Africa, where he was quoted as saying that 'Heartland is not a good side.' I understand that he said that we did not play like a team that got to the final of the championship last year. That means he hopes to shock us at home in Owerri.

'But I can assure him that he and his team will bite the dust in Owerri. As far as I'm concerned, they are out of the CAF Champions League this year. Nothing will save them from biting the dust in Owerri,' the coach popularly called Caterpillar vowed.

Emeteole banks on enterprising John Owoeri, who missed the first leg in Pretoria due to his failure to procure a travelling visa after he returned late from trials in the United States.

The constructive midfielder is expected to provide the killer passes for Zambian import, SignsWonder Chibambo and speed star, Emeke Nwana to do the damage upfront.

The winner of the two-legged fixture at the end of tomorrow's game will qualify for the lucrative money-spinning group phase, while the loser will have to joined the teams campaigning in the less fancied CAF Confederation Cup.