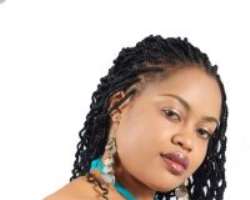 Glo Ambassador and one of the sultry actresses Nollywood has produced, Nkiru Sylvanus, no doubt, is a gentle-nature actress. Her many roles she played in the past all presented her in the good light of her fans, this is why, she was rated number one Igbo actress a couple of years back in Enugu.

Despite her simple lifestyle nature, the pretty Nkiru, of course, is like every other woman who falls in love, even fools do too. However, this news is actually about her flighty night with a guy called Frank who runs an exotic nightclub called Q Club on Allen Avenue, opposite Oshophy Plaza, Ikeja Lagos.

Their relationship, according to information started some years back when Frank freshly came back from the United States of America. The two Igbo estranged lovers, we were told, met in one of his club nights and their affair was fully solidified when Chinedu Ikediese a.k.a. Aki threw a birthday for his lover who later dumped him. Having convincingly satisfied with Frank's sense of approach that night, Nkiru who has spent all her life in the East, we learnt, later returned to Lagos to spend some flighty nights with the Igbo big boy who is also a car merchant.

Their love nest, reliable source squealed, was at a particular joint in Ogundana area of Lagos called V's Guest House and the two love birds were said to have spent quite some nights together in the hotel enjoying themselves to the fullest of their secret love affair. All effort to reach Nkiru over this issue was aborted as the number made available to us was not going through.