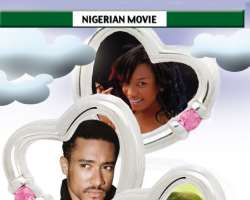 Preamble: Tchidi is a very inconsistent writer and director. Sometimes he slams it out of the park and sometimes, he screws things up. Let me by saying that in my opinion, this was a slam dunk, a grand slam, a home run! What I wonder though, is why he had to give such a good movie such a ridiculous name. Who names these things? I almost did not watch it. And yet, what a good movie it turned out to be!

Story: Catherine (Omotola Jalade Ekehinde) is a young girl who lives with her mother (Geredine Ekeocha) and her sister Debbie (Tonto Dike). Problem is, Catherine has been badly disfigured in a car accident that killed her father and left her with facial scars and a bad limp. Now she considers herself ugly and suffers from very low self esteem. Her situation is not helped by her beautiful sister Debbie who misses no opportunity to put her down. Into this dysfunctional setting walks the very handsome and rich Omar (Majid Michel) who for some inexplicable reason seems to be very attracted to the ugly duckling Catherine, much to Debbie's chagrin. How does it work out for the three of them?

Trailer (although this trailer is pretty bad - a cut and join job if you ask me. Makes no sense!!)

Review
Positives: Omotola is one of Africa's top actresses for a reason – she can act. SHE CAN ACT! Dang!! I loved her in this movie – loved her. Her vulnerability, her self loathing - there were times she almost moved me to tears. She was clearly the star of this flick. I cannot lie – she pulled it off big time. I have never been a big fan of Tonto Dike's but with performances like this, she is starting to win me over. She was excellent as the beautiful spoilt brat of a sister with clear feelings of entitlement. And Majid – sauve, handsome, compassionate and yet, conflicted – veeeery nice! I loved the casting of this movie. Honestly, I have no complaints about any single cast member. Even the doctor (Prince Okah), I think did really well. Most delightful!

I loved the story. While it was kinda cheesy, it was also very sweet, and yet not totally predictable. I did not really expect some of the events that took place, so I really liked that. I loved the fact that Tchidi was able to take a very simple story, requiring such few cast members, and yet make something so engaging out of it. Good job.

Negatives: First, Omotola's make up. Yeah it made her look funny, but why was the supposed burn green? Abi was it just my eyes? It was green!! They needed to do a better job with the burn victim story and associated make up. Haba!! Secondly, Tchidi needs a better camera. Yes, the pink spot is gone, but his camera is definitely not the same standard as the one Vivian Ejike used in Silent Scandals. That was a pretty film visually. In this one, the picture quality not as crisp. Tchidi, you need a new camera!!

Thirdly, while I have heard frequent complaints about Tchidi singing in all his movies, I have not really seen his stuff of recent. Well, in this one, we were subjected to the dude singing some really corny tune, while basically telling the story of the movie. Too cheap to pay someone to write and sing a decent sound track? Na wah o.

And then, as I earlier mentioned, there is the stupid name of this movie. Eventually, I figured out why they gave it that name, but its still stupid – honestly. If you take the time to make such a good movie, then take the time to name it properly!

There were also some scenes that were too long - of Catherine walking all over the place for instance - normal Naija movie problems.

In general though – darned good movie. Very nice. I highly recommend it.

Themes and Worldview: This is what I loved most about this movie – its realistic depiction of the role of physical attractiveness in getting people through even the more mundane activities in life. There is a powerful scene where Omotola's character weeps as she wonders why nobody sees past her ugliness and sees the person inside, why noone believes that any good thing can happen to her. “I am a good person; I am still here” she wept. It was touching, and it hit me on a visceral level, because we are all guilty of this: judging people by what we see – beauty and race being the most obvious characteristics. The film so artfully captured the pain suffered by people who are rejected for attributes they have no control over. Very touching. And even beyond art, the themes in this movie have some powerful real world applications: For instance, study after study have shown that better looking people get better jobs, and are likely to be treated better in general

As one character in the movie said “Yes, beauty is only skin deep, but no one told me how deep that skin is.” In other words, we are all potentially very shallow people, ignoring the person inside because of the outer packaging. Even in the bible, GOD had to teach the same lesson to one of his prophets saying “man looks at the outward appearance, but GOD looks at the heart”.