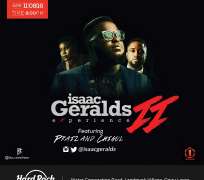 Soul signer Isaac Geralds is on the warm up, the Fall in Love crooner readies him self for the second instalment of his "Isaac Geralds Experience" set to hold at Hard Rock Cafe Lagos on Thursday.

The Live Band night has been taken over as Isaac Geralds prepares to give a stellar performance with some of the best live music in town. Living to it's billing Isaac Geralds has gone on to invite feature acts like Praiz and Chigul whose reputations precede them. Fans and patrons can look forward to an intimate night with touching & and thrilling music along with some of the best dishes in Lagos.