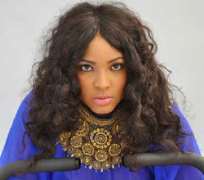 No sector has been spared in the recent spiral downturn of the economy, not even Nollywood in all its glamour and glory. Ex-Delta girl, model and Nollywood actress Shirley Igwe, recently in an interview with Potpourri takes on issues on her personal life and life as a Nollywood actress.

The 28 years old actress who is truly a sight to behold had this to say, “Things are shaky, not just in the movie industry but everywhere, things are like that. Maybe if things stabilise, everything will stabilise,” she says.

Speaking on the effect of the times on Nollywood, the actress counts herself lucky to be among those still working. “The people working now are the lucky ones and I’ve been working” she said.

People are not really filming anymore. People still shoot though, but not really anymore. For instance, last year if you go to Festac, you could see about 10 productions going on but now you’ll probably see 2. On the Island, you may see more than 10 productions going on but right now, you’ll probably see like 5″ the actress added

“This may be time for actors to search inward and begin to develop other talents until they ride out the recession. For me, “I still blog but I’m trying to work on connecting it to my youtube channel, get the blog running“

The talented Shirley Igwe graduated from Imo State University with a degree in Mass Communication in 2010. She was the Principal Protocol Officer to the Imo State governor, Rochas Okorocha until recently and has appeared in the movies The King And The Maiden, Last 3 Digits, Mercy The Bus Driver amongst others.