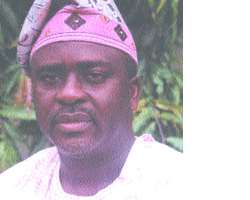 An actor, theatre director, film producer and scholar, Dr. Sola Fosudo, is the star of many popular films and television drama series. A lecturer in the department of Theatre Arts and Music at the

Lagos State University (LASU), Fosudo who recently marked his 52nd birthday holds two traditional titles. In this interview with TONY OKUYEME, the regular face on stage before moving to the screen gives an appraisal of live theatre in Nigeria.

IT is usually not easy getting him for an interview, given his busy schedule as a university teacher. When he is not in the class, Dr. Sola Fosudo spends his time reading or researching, or when the opportunity offers itself, as he puts, he is on location acting. The recent play reading session, the 28th in the series, organised by the National Troupe of Nigeria, provided the scene and backdrop for an interview.

With pleasantries over, Fosudo began the story of his experience in the theatre, noting with emphasis, the decline of live theatre.

“You already know my name. I teach at the department of Theatre Art and Music, Lagos State University. I am also an artiste; I don't like calling myself an actor, because apart from acting I also direct and produce. That is what I do basically.”

With his busy schedule as a lecturer, does he still find time for acting? It was apparently a question that he has been asked several times, as he simply smiled and said, “Yes! Why not? It is true that one has become a bit busier in the university. You know, when you are in an organisation, as the years roll by, you also move up and responsibilities increase. And because that is my primary job, I would not want to joke with it. So I don't have much time for running around on locations. But, of course, I still have my weekends and holidays, so when I am free I still do series. At present, I am in a soap running on television titled So Wrong, So Wright. I play the role of Mr Wright.”

Years ago, his production company called Centre Stage Production, was a regular producer of stage plays, especially at the National Theatre, Iganmu, Lagos. What really has happened to the company, one asked.

Again, he smiled and said, “Centre Stage Production is still intact. We are still doing things. Yes, I used to do productions when I was much younger and as a freelance artiste between 1989 and 1994. I was actively doing live theatre. But when I started working with the Lagos State University (LASU), Ojo, what I did was to move into video, film and television productions because it would not be easy moving from LASU to the National Theatre, Iganmu, everyday. For a television production, you can arrange yourself. So I produced some video films from 1995 to 1999. I did about four or five films”.

According to him, the first film we did was Oko Iyawo, a very popular Yoruba film which was shown at the National Theatre. This was followed with Pete Pete, which was also popular and shown at the National Theatre. “After that,” he continued, “we did “Strange Ordeal” which was co-sponsored by Chief Rasheed Gbadamosi. The other film we did was “Heart Break.” After that, Centre Stage Productions has been doing one or two productions, here and there.

Currently, we have a programme on Lagos Television (LTV). It is called “Waste Management and You.” So, Centre Stage Productions is still working, but underground. Once in a while, we do stage shows, and apart from that we are into television and post-production”.

Would say the live theatre sector is witnessing growth in Nigeria, I asked.

His response was resounding: “No! It is not growing. The live theatre has a lot of problems. And I think the major problem is the non-availability of performance centres, theatre halls in Nigeria. For many years the theatre practice has been over-centralised, and theatre cannot grow that way. What I mean by oner-centralisation is to have one theatre building in one central place, and everybody who wants to do a play, everybody who wants to watch a play would have to leave wherever they are to come to that central place. Theatre can never grow that way; that is how it has been for many years. And over the years, we thought that there would have been de-centralisation or what is called regionalisation, or what is called the little or community theatre. That is how theatre is practised all over the world. But in Nigeria, it is unduly centralised. Consider it, you the National Theatre is here in Iganmu, and you expect somebody from Agege, Ketu and Lekki to be coming here each time to watch a play; you expect somebody from Badagry, somebody from Ijaiye to be coming here to watch plays.

Is that how theatre can grow? Why can we have at least one theatre in Lekki, one in Victoria Island, one in Ikoyi, one in Surulere, one in Yaba, one in Ikeja, one in Agege, one in Satellite Town, one FESTAC Town, and so on? The government has a role to play in it. The public sector also have a role to play too, because in UK we have what is called Council Theatre owned by local governments. So local governments can build theatres, and make youths or theatre people to run them. A lot of youths can get engaged and get occupied working in this theatres. Also private people can build theatres and run them as business, and as centres for other events and so on. These are entertainment investment that we need in Nigeria, than to just build one theatre at Iganmu and they want to promote arts and culture with that. It is a big joke. It can never grow like that. Community theatre, regional theatre, that is what is done everywhere in civilised world.

The university theatre is a different ball game entirely. If you want to discuss that, it is a different thing. In fact live theatre in Nigeria is surviving basically now through the campuses because the campus theatre are not affected by all the problems which I mentioned earlier. In each of campuses there is a theatre hall, that is like the regional theatre in the first place. What it means is that in LASU there is a theatre building; in the University of Lagos there is a theatre building. So you have regionalised it. Then the issue of bad roads with the campuses are not there as roads in all the campuses at least are well tarred. Then transportation problem within the campus. So all those social problems are absent. And the other economic problems are not as acute as they are in commercial world outside. For instance, how much do you rent a hall in the campus if you want to do a show? Then the theatres are well equipped and with a ready made audience. So economically also, the campuses are well favoured in terms of play productions. The only thing is that this campuses have restricted audiences; they are not really for commercial audiences. They are not for outsiders; they for people inside. Only a marginal percentage of people who come from outside can get to see these shows in the campuses. So it is not a commercial thing, it is a different ball game entirely.

On his 52nd birthday

My 52nd birthday was on March 18. I celebrated my 50th birthday celebration to launch my foundation Blessed Fruit Foundation. It was much like a spiritual thing for me.

I feel this way it is to be 10, 20, 30 or 40 years. I am not feeling a difference in my age, except that when I look at the mirror some times, I know that I am not getting younger. Late Prof. Ola Rotimi wrote in his play, Kurumi, that “as a man climbs the lather of age, the body feels strange things that mock the spirit”. So sometimes the body may be feeling strange things as he grows older.

I am expecting God's glory to be made manifest in my life more than more. God's glory has already been made manifest. God has rescued me from the world; and He has shown life by making me a born-again Christian. That is a lot of achievement, and it is great indeed for one to move from a worldly life to a new kind of life one realises that God is in charge of everything that happens to you and you cannot do anything in your own power.