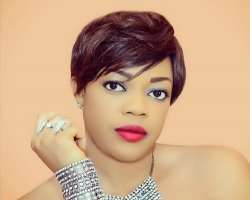 Eve Esin is one of the few actresses who is bold enough to show off things the way Mercy Johnson does and she is getting attention from the top. A while ago, the script interpreter shared a photo of herself with some snakes around her body, yet she was full of smiles.

Although, according to her it was a shot from a movie she did a while ago, but her fans were wondering how she could boldly hold snakes with so much smiles on her face.

Eve is an actress who hails from Oron L.G.A, Akwa Ibom State, Southern part of Nigeria. She studied Theatre Arts in University of Calabar