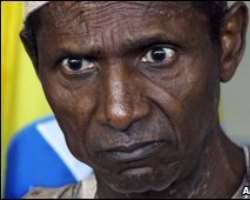 A presidential aide and the information minister confirmed his death. Mr Yar'Adua, who became president in 2007, had been ill for some time.

The government announced seven days of national mourning and said the president would be buried on Thursday.

Vice-President Goodluck Jonathan - who became acting president in February - will be sworn in later, reports say.

The Nigerian Television Authority interrupted its normal programming to announce the news, in a brief statement early on Thursday.

The announcer said: "The president and commander-in-chief of the armed forces, Umaru Musa Yar'Adua, died a few hours ago at the presidential villa.

"Security aides notified the national security adviser, General Anou Bissou, who immediately called the acting president. The late president has been ill for some time."

Mr Yar'Adua, a Muslim, will be laid to rest later on Thursday in his home state of Katsina, in the north of the country.

A spokesman for Mr Jonathan said the acting president received the news with "shock and sadness".

In November, Mr Yar'Adua went to a hospital in Jeddah, Saudi Arabia, for several months, during which time he was not heard from, apart from a BBC interview.

He told the BBC by telephone in January that he was recovering and hoped with "tremendous progress" to resume his duties.

His long absence and the lack of detailed information about his health led to a political limbo in Nigeria that was only filled when Mr Jonathan was named acting president.

There had been tension between the two men's supporters and in March Mr Jonathan dissolved the cabinet and later put his own team in place.

According to Nigeria's constitution, Mr Jonathan is to choose a deputy with whom he will serve out the remainder of the presidential term until elections, which were due next year.

Quiet man
Mr Yar'Adua's election in 2007 marked the first transfer of power from one civilian president to another since Nigeria's independence in 1960.

He came to power promising a long list of reforms, including tackling corruption and reforming the inadequate power sector and the flawed electoral system.

He made progress in banking reforms, but analysts say he made the most progress of his tenure in tackling the unrest in the oil-rich Niger Delta, by offering an amnesty to rebels.

The BBC's Caroline Duffield, in Jos, central Nigeria, says President Yar'Adua will be fondly remembered as a quiet and softly-spoken man whose integrity was respected.

But in his last months, it was clear he was too ill to take decisions himself.

His family and closest political advisers had faced severe criticism and were accused of using him to hold on to power, says our correspondent.