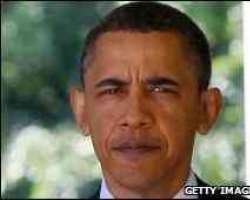 US President Barack Obama has renewed sanctions against Syria, saying it supported terrorist groups and was pursuing weapons of mass destruction.

In a statement, he said Syria “continues to pose… an extraordinary threat” to US security and policy.

The US has tried to engage with Syria but recently accused Damascus of arming Lebanese militant group Hezbollah with sophisticated missiles.

Syria has dismissed the claims it is supplying Scud missiles to Hezbollah.

In a message to Congress to renew the sanctions for a further year, Mr Obama said the Syrian government had made “some progress” in checking the infiltration of foreign militants into Iraq.

But he said its “continuing support for terrorist organisations and pursuit of weapons of mass destruction and missile programmes, continue to pose an unusual and extraordinary threat to the national security, foreign policy, and economy of the United States,” Mr Obama said.

In 2005 Washington recalled its ambassador to Damascus following the assassination of Lebanese Prime Minister Rafik Hariri, which was blamed on Syria.

Mr Obama named Robert Ford as new ambassador in February, but his appointment has not yet been confirmed by the Senate.