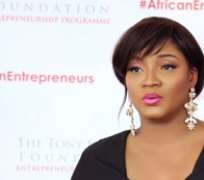 Nollywood actress, Omotola Jalade-Ekehinde, recently got fumed up after a fan attempted to mock her that she does not know how to sing.

The drama started after the actress had announced that she has been made the fifth judge at an ongioing music reality show 'The Voice Nigeria.'

Omotola was told by the fan that she cannot even sing after making a debut some years ago but failed “Laughing my ass out, but you can't even sing. Remember your short lived musical career? Tragic.” But this did not go down well with the actress who replied immediately.

Omotola made it clear that she is a very good singer only that she decided not to promote her songs which was the reason why it did not go far. “Ode! I didn't promote it . I can sing than most of your popular singers. Find my albums and listen.”