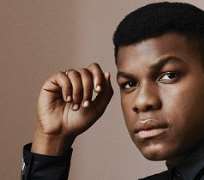 John Boyega has been made a patron of the Theatre Peckham in London, the theatre he began acting in as a child. He was a member of the theatre from age 9 to 14. John who recently came to Nigeria to spend some time with his family said that he was happy with the theatre.

"I admire Theatre Peckham's continued mission to increase diversity in the creative industries," he said. "As a graduate of the company, I am honoured to be in a position to give back." John is due to return to the stage in The Old Vic's production of Woyzeck in February 2017

The theatre's founder and artistic director, Teresa Early, said Boyega's role as patron "will be a huge boost for our young members", adding: "Now there's an act for them to follow."

John proudly said “So grateful for this position and dedicated to making sure that kids who want to artistically express themselves have that opportunity like I did from the age of 9. This is just mind-blowing!“