Ella Mensah Gets into Trouble After Attending Award Night (photos) 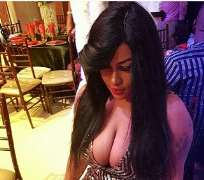 Ghanaian actress, Ella Mensah, was recently at the 2016 edition of the City People Awards held in Lagos, but rather than allowed guests concentrate on the show, she chose to turn many heads on with her outfit.

The actress got many talking when she flashed both her oranges and her laps which revealed her tattoos.

With such an outfit, not long after the photos surfaced, the actress faced criticism from people who were not comfortable with her choice of clothing.

Even at the event, she had to take off her shoes while she went back into the car as she explained that the shoes were too tight for her to walk with.