WHY NIGERIA IS IN CRISIS â€“ KALU 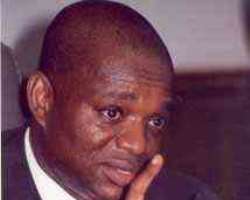 Former Abia State governor, Dr Orji Uzor Kalu has attributed the crisis in the country to the widening gulf between government and the people.

Kalu explained the connection on Thursday in Lagos while speaking as special guest speaker at the annual Alao Aka-Bashorun memorial lecture organised by the Nigeria Bar Association (NBA), Ikeja branch as part of its yearly law week activities in honour of the former NBA president, (1987-1988).

According to Kalu, the social tension witnessed in different parts of the country could be traced to the disconnect between the governed and people in government.

'Suddenly, the umbilical cord snaps after they got into power, and they became sequestered behind high walls in government quarters. Soon, the people with whom they shared tastes, passions, lifestyles, hopes and aspirations become strangers. They are in government pretending to represent the people, but there is no longer a relationship, a disconnection has occurred. They have no affinity again. In fact, they have become total strangers until maybe in another four years when they want to renew their mandate. That is when they go back and try to re-establish the severe umbilical cord. It is unscrupulous, unkind. It is Machiavellian,' he said.

He stated this in a lecture entitled 'The Search for the Soul of the Nigerian Nation,' where he spoke on the sub-theme: 'The Disconnect between Government and the Governed in Nigeria.'

While condemning the ethnic killings in Jos, unrest in the Niger Delta, suspicion among different ethnic nationalities, he noted that they are products of social injustice.

'The gap between the 'haves' and the 'haves-not' increase daily, and there is anger in the hearts of the people,' he observed, warning that 'the vacuum is being filled by extremists.'

Identifying the root cause of the disconnect between the people and their leaders, the Peoples Progressive Alliance (PPA) Board of Trustees chairman noted that a high percentage of the nation's revenue is being used to service public office holders to the detriment of the people they rule.

Specifically, Kalu, referring to a media publication, explained that just '17,474 people who hold government positions earn N1.12trillion yearly. This is about one third of Nigeria's annual budget.

'Is public service not a sacrificial venture again? When public officers earn so much and those they govern earn so little, if any at all, it will inevitably cause a disconnection between them. It will be 'we' versus 'them.' The public see officials in government as oppressors and not someone who represents his interest.'

He further identified the information gap as a cause of disconnection between the people and their rulers, noting that 'when there is no information, rumours and suspicion will thrive.'

Consequently, he expressed disappointment over the failure of the National Assembly to pass the Freedom of Information Bill into Law.

'When both the media and the public do not have unfettered access to information, the gap between the governed and those in government become inexorably wide,' he added.

Similarly, the politician expressed concern over the continued recognition and emphasis on structural cleavages such as indigenes and settlers in several parts of the country, 50 years into nationhood.

He described the attitude towards the cleavages as shameful while recalling that efforts by Senator Jonathan Zwingina to cure the malady through a Bill on Residency, which will make any citizen who has lived in a place for five years entitled to all residency rights was rejected some years ago.

As a way out, Kalu called for a synergy between the people and the government and unity of purpose in the country.

'Let's have unity, let's have amity, let's have strong synergy between the governed and the government, and we will see our country, indeed and indeed the African continent, emerging and soaring forth into glorious future,' he added.

Also speaking on the occasion, Prof Itse Sagay (SAN) blamed the country's woes on lack of true federalism, which must necessarily entail fiscal federalism for the federating units.

He said: 'everything is at the whims of the federal government,' hence, it was difficult for the states to operate properly as expected in a federal state.

Sagay said that Nigeria must search for 'her soul,' for things to work properly and the country to move forward.

The Chief Judge of Lagos State, Justice Inumidun Akande represented by Justice Ayo Phillips said both the bar and the bench have crucial roles to play, to ensure justice and rule of law in the society 'I imagine what the society would look like without the law and legal practitioners,' she stated, urging the NBA to continue to stand against corruption and lawlessness.

Mrs Atinuke Alao Aka-Bashorun, widow of the late president, paid glowing tributes to the memory of her late husband and said she was lucky to have married him. She described him as a man of integrity and a core believer in the promotion of social justice.

In his intervention, Prof Pat Utomi attributed the genesis of the challenges of indigeneship and settlers to the colonial masters, adding that they created 'a system of divide and rule.'

The Speaker of the Lagos State House of Assembly, Adeyemi Ikuforiji, who moderated the lecture, attributed the major challenges confronting Nigeria to poverty.

While lauding the late Aka- Bashorun for his service to the nation, he expressed optimism that the soul of the country would be strengthened with the concerted effort of well-meaning Nigerians.

Afenifere chieftain, Chief Ayo Adebanjo who described himself as a personal beneficiary of the deceased's selfless service to humanity urged the gathering to emulate him in order to revive the core values of integrity and honesty in the society. Other speakers at the event include Afenifere Renewal Group (ARG) spokesperson, Yinka Odumakin and an activist, Debo Adeshina.