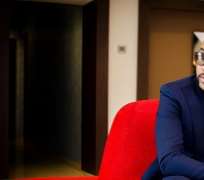 When a political party was campaigning to win the hearts of Nigerian's it was talking about 'change' as its main slogan and indeed the change is now everywhere especially in the entertainment sector.

Recently, fans have not been taking anything their favourite celebs tells them any more as they now try to distill the truth from whatever they are being told by these celebs.

Most of these celebs have decided to make use of agenda setting theories on the minds of their fans and these has left many taking to various vices just to live the luxurious lifestyles they see their celebs have.

Banky W, seems to fall under that same category and he has not been spared after he shared a picture of his claimed Yeezy shoes which was a gift from his brother and while sharing, he claimed it was the best shoe he had ever worn due to its firmness on the ground.

“My little brother got me some yeezys, and I'm not exaggerating when I say they're the MOST COMFORTABLE shoes I have ever worn. I'm in shock. This is not a paid advert. I may never wear another shoe again in my life. My feet are in shoe heaven. I'm wearing these with everything I have got, 3 piece suit and yeezys, agbada, kaftan, birthday suit, whatever,” he bragged.

But some Nigerians for who they are, have got no chill as the singer was called out for bragging with shoes being alleged to be fake with a description of how the original looks like and its features.

•lanre_savage: Fam those are not real yeezy's. I can tell you that for sure, look underneath if it has a white styrofoam on it plus the inner insole are engraved with adidas, finally the ankle part has to have a larger hook kinda treading on it, Just saying I might be wrong Banky Wellington.1 more fact to prove this, the front of those kicks should bulging out not flat, it's suppose to bulge and sown out.