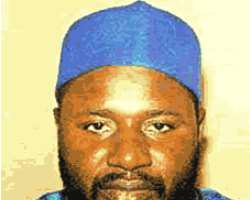 Egyptian embassy, yesterday in Abuja said the13-year-old girl at the centre of Senator Ahmed Yerima's marriage to a minor as fourth wife, is still at school in Egypt.

Yerima, however, denied in an interview with the BBC that the girl was 13 but said that as a Muslim he had not broken any law by marrying the teenager.

'The girl is still in school in Egypt and nobody has complained to the embassy in respect of the girl,' Egyptian embassy spokesman Mohammed Saber disclosed. He said however that the embassy 'will follow up the issue' because it is illegal in Egypt to marry an underage girl.

The senate, on Wednesday ordered an inquiry into the wedlock after claims by rights groups that Yerima paid a dowry of $10,000 dollars to marry the girl. Women's groups protested outside parliament on Tuesday to urge the senate to investigate the claims.

In a telephone interview with the BBC's Hausa service yesterday, Yerima defended himself.

'I don't care about the issue of age since I have not violated any rule as far as Islam is concerned.' Describing those complaining as 'detractors,' 'history tells us that Prophet Muhammad did marry a young girl as well. Therefore, I have not contravened any law. Even if she is 13, as it is being falsely peddled around.'

A petition delivered to the senate by the rights groups said the marriage violated Nigeria's Child Rights Act of 2003 which forbids marriage with girls under 18. Violators risk five years in jail.

It said Yerima 'is in the habit of marrying minors and has gained notoriety in enticing girls to marry him, having contracted (a marriage) in 2006 with a 15-year-old girl called Hauwa'u, whom the senator allegedly caused to drop out of school, as fourth wife.'

It claimed the senator divorced Hauwa'u, when she attained 17 years and nursing his child, so that he could marry the Egyptian. The petition urged the senate to investigate the allegations and to establish the name of the child-bride, her age and the circumstances of her entry into Nigeria. The National Agency for Prohibition of Traffic in Persons on Wednesday ordered the senator to appear before it to respond to the allegations.

Yerima was the Governor of Zamfara State, where he introduced Sharia law for the first time in a northern state in 1999. He said he felt his backing of Sharia law was responsible for the uproar over his marriage. 'I consider all those complaining about this issue as detractors, because since 1999… many people have been waging different kinds of wars against me,' he told the BBC's Hausa Service by telephone from Egypt.

The senator said he followed the'standard rules of marriage in Islam.' 'I don't care about the issue of age since I have not violated any rule as far as Islam is concerned,' he said.

'History tells us that Prophet Muhammad did marry a young girl as well. Therefore I have not contravened any law. Even if she is 13, as it is being falsely peddled around. If I state the age, they will still use it to smear Islam,' he said.