Wizkid Alleged to have Broken Microphone into Pieces in Ghana 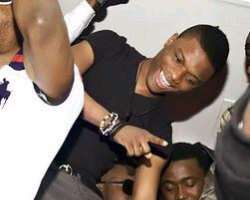 Do you know that Wizkid smashed a microphone during his last performance in Ghana? Yes! We have the gist for you. This story has been put on hold because it might have taken over the hype of the last concluded 17th edition of Vodafone Ghana Music Awards. The incident happened before the event that was held on Saturday May 7 2016 at the Accra International Conference Centre in Ghana.
Things didn't go according to planned when Wizkid got to the Conference Center on time for sound check, but he ended up being delayed for almost two hours. The reason for this delay is what the organizers of the show have not been able to explain.

Finally, he was allowed to mount the stage and test his mics. He was rehearsing when he was forced to stop the sound check because the time for the event was close and the organizers didn't want guests to meet him on stage.

He angrily smashed the microphone he had in his hand on the floor, breaking it into pieces. That was not all, he gave the organizers a piece of his mind before walking away. Things like this often happen in big programs and what everyone needs is patience.