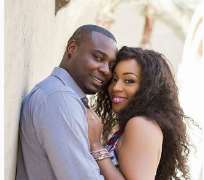 Today, Thursday, May 11, 2016, Davido's elder sister Ashley Coco Adeleke is getting married to her lover, Caleb.

Davido's dad, Elder Adedeji Adeleke, Davido himself, and a few other faces have been spotted at the traditional wedding planned by Zapphire Events.

Recall that Mayorkun Ashley Coco was accused of child trafficking and abduction alongside Davido in December by his baby mama Sophia Momodu while travelling with Imade and their father to Dubai.

When Imade was taken away from her mother Sophia, Ashley was the one taking care of her.
Davido's eldest sister, Sharon Adeleke got married to her beau, Yomi Ademefun in Miami, US on Sunday, September 1, 2013.