OIL REACHES COAST IN US DISASTER 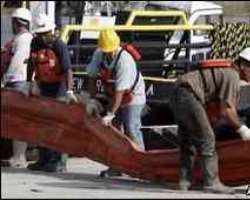 Oil has started washing ashore on the US Gulf Coast from a leaking offshore well, the US Coast Guard has said.

Up to 5,000 barrels of oil a day are thought to be spilling into the water after last week's explosion on a BP-operated rig, which then sank.

A state of emergency has been declared in Louisiana and President Barack Obama has pledged “every single available resource” to help.

The US navy has been deployed to help avert a looming environmental disaster.

The US Coast Guard reported late Thursday that long, thin traces of crude oil were washing up on the Louisiana shoreline.

Thicker concentrations were a few miles offshore.
'National significance'
“This is a very, very big thing,” said David Kennedy of the National Oceanic and Atmospheric Administration.

He told Associated Press news agency: “And the efforts that are going to be required to do anything about it, especially if it continues on, are just mind-boggling.”

An emergency shrimping season was opened on Thursday to allow fishermen to bring in their catch before it was fouled by the advancing oil.

Homeland Security Secretary Napolitano: This is a spill of national significance

The US government has designated the Gulf of Mexico oil spill as an “incident of national significance”.

This allows it to draw on resources from across the country to deal with the leak.

Louisiana's governor, Bobby Jindal, has declared a state of emergency and asked for federal funds to deploy 6,000 National Guard soldiers to help with the clean up.

The Louisiana coastline, with its rich shrimp and oyster beds, is the most threatened by the spill.

Navy vessels are helping to deploy booms to contain the spill.

He has also ordered environmental agency officials to inspect all offshore oil rigs and platforms to make sure they adhere to US safety codes.

Speaking at the White House, Mr Obama said: “While BP is ultimately responsible for funding the cost of response and clean-up operations, my administration will continue to use every single available resource at our disposal, including potentially the Department of Defence, to address the incident.

“And I have ordered the Secretaries of Interior and Homeland Security, as well as Lisa Jackson of the Environmental Protection Agency to visit the site on Friday to ensure that BP and the entire US government is doing everything possible, not just to respond to this incident, but also to determine its cause.”

'Devastating'
The US Coast Guard said earlier that up to 5,000 barrels of oil a day – five times the previous estimate – might now be leaking into the water.

BP's chief operating officer of exploration and production, Doug Suttles, said the company was using remote operative vehicles (ROVs) to try to find out how much oil was leaking into the sea. OIL SPILL DISASTERS

1991: 520m gallons were deliberately released from Iraqi oil tankers during the first Gulf War to impede the US invasion

1979: 140m gallons were spilt over nine months after a well blow-out in the Bay of Campeche off Mexico's coast

1979: 90m gallons leaked from a Greek oil tanker after it collided with another ship off the coast of Trinidad

1983: 80m gallons leaked into the Gulf over several months after a tanker collided with a drilling platform

BP in choppy waters after spill
In pictures: Efforts to contain leak
Send us your comments
“This is very, very difficult to estimate,” Mr Suttles told reporters.

“Down below the surface we actually can't meter this oil so we can just observe it… what our ROV pictures show to us on the sea floor hasn't changed since we first saw the leak… but what we can say based on what we're picking up on the surface it looks like it is more.”

Mr Suttles estimated something between 1,000 and 5,000 barrels a day was leaking.

A resident of Bay Saint Louis in Mississippi, John Gerger, told the BBC the smell of oil was becoming stronger along the Gulf Coast.

“It's as though a diesel truck is parked in the front yard,” he said. “The potential impact of the slick could be devastating on an area that has just recovered from [Hurricane] Katrina.

“Fishing and shrimping is such an important industry here, and could take a massive hit. Local fishermen have been advised to go out and try to recover as much as they can before the slick approaches land.”

Lawsuit
Efforts to stem the flow are being complicated by the depth of the leak at the underwater well, which is about 5,000ft (1,525m) beneath the surface.

Wednesday saw a US Coast Guard crew set fire to part of the oil slick in an attempt to save environmentally sensitive wetlands.

A “controlled burn” of surface oil took place in an area about 30 miles (50km) east of the Mississippi River delta.

Engineers are working on a dome-like device to cover oil rising to the surface and pump it to container vessels, but it may be weeks before this is in place.

It is feared that work on sealing the leaking well using robotic submersibles might take months.

BP is also working on a “relief well” to intersect the original well, but this is experimental and could take two to three months to stop the flow.

Under US law, BP will be expected to meet all the costs of the spill clean-up operation.