After Tiwa Savage’s Interview, Teebliz, Allegedly Ready To Fight Back 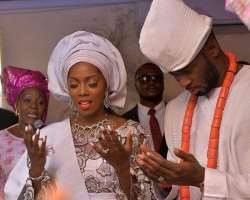 Although nothing much has been heard about Tunji Balogun 'Tee Billz' after he attempted suicide on the Lekki-Ikoyi Bridge but fortunately for him, Banky W and Peter Okoye of P-Square saved him just at the nick of time.

Depression from suffocating marriage to Tiwa Savage, was manipulated as the major reason but the ex- artiste manager's woes were soon compounded when his wife granted an interview to portray him as an irresponsible husband, father, drug addict, chronic debtor and a first rate womaniser.

With the enormity of the allegations, everyone expected Tee Billz to fight back and tell his own side of the story but what has come from him is dead silence.

Adding to that, a source very close to him confided in Potpourri that the embittered husband of Tiwa Savage is preparing to fight back, not with emotional outbursts, the like his wife demonstrated in her video interview but with hard facts.

The source disclosed that the first of such many steps to fight back was the drug abuse test which his friends made him take and Potpourri can authoritatively confirm he actually took the test and he was declared free of drug use.

Meanwhile, contrary to reports making the rounds that the former manager and husband of Tiwa Savage, Tee Billz was invited and arrested by the National Drug Law Enforcement Agency, the agency has squashed the reports, saying there was no substance in the report.

The spokesperson for the agency, Michelle Ofoyeju told Potpourri that it is not the business of the agency to arrest drug users. “There is no substance in the story that NDLEA invited or arrested Tee Billz. The agency cannot be dragged into their marital crisis.
We do not arrest drug abusers, what we do is to recommend them for counselling and rehabilitation. The drug user is also a victim of drug trafficking” she said.