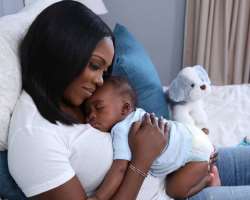 After the messy drama that hit her home some days ago, Urban96FM has decided to release an interview they had with Tiwa Savage in the studio.

It was gathered that, it was actually Tiwa Savage's last interview before the drama started…just before she dropped “If I Start to Talk”.

The sexy singer and mother of one talked about having just one more girl, then adopting lots of kids because 'many children need a home'.

“I do want to have another one but it's just that the thought of going through all of that again…because I really had a difficult pregnancy. I was throwing up the whole nine months, I was eating a lot. Even if I still have my own – by God's grace I want a little girl – I will still adopt because a lot of children do need homes,” she said.

On if things have changed since having her baby, Tiwa said “Physically some things are south, more so than others but mentally I'm really happy. I'm more motivated…more so than ever before. I have this renewed strength and I think I'm more organized now because I have to make sure my son's okay, my husband's okay and I'm okay.”