S3x Before Marriage is Sin But I Enjoy Having it… Ghanaian actress, Princess Shyngle Reveals 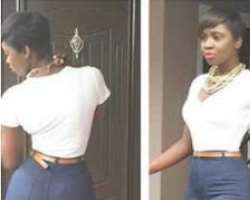 Popular Ghanaian actress, Princess Christian Shyngle, has gotten many grumbling after she made some revelations about her personality in an interactive session with fans recently.

The actress stated that she feels her fans should get to know her more and as such, she was ready to entertain any form of questions that comes her way.

One of such questions put up to her was for her to disclose the age at which she became a woman from the calm girl she used to be and ready to answer she said “I was 18 when I had s3x for the first time.”

The actress admitted that being a good girl from a humble Christian background, having an affair before marriage is a sin but as human, they will always want to have a feel of it with time.

She also opened up that the last guy who slept with her was her ex-boyfriend and that she intends to get married at age 30.

Princess also noted that no matter what she does, she cannot and has never dated someone in the entertainment industry.