Cynthia Morgan embarrasses self during an interview 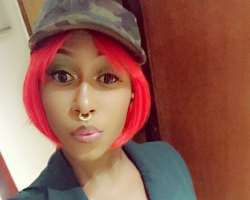 Seyi Shay has been trending after her failure to answer correctly the meaning of EP on Trending, a program from the stable of Hip TV.

The next person trending now is Cynthia Morgan following the way she embarrassed herself during a questioning section on MTV's Big Friday show.

Should we call these celebrities that embarrass themselves, beauty without brains?

I keep wondering why they would fail questions a primary school student would conveniently answer.

Except it was a deliberate action to help them trend, because on a close look, both Cynthia and Seyi Shay has recently released a single.

The question Cynthia was asked was a simple mathematics “what is 2x2x2/2-2?”

She embarrassed herself firstly by saying, 4 times 2 is 6, and finally solved the equation with her answer as 4.

Fans have since lashed out at the German juice crooner for openly embarrassing herself.