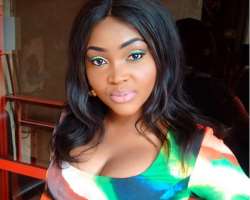 With the breaking news fans of some popular celebs continue to wake up to hear each time about their failed homes, they are left with no choice but to ask several questions of where their celebs got it wrong.

The latest which is still making headlines is in the home of Teebillz and Tiwa Savage. Has many have continued to air their opinion on the matter, some feel it should be a private affair and not brought to the public view.

For actress, Mercy Aigbe, marital issues are not not something new in homes and for it happening to entertainers should not be a big deal either.

She made a salient point while speaking with new telegraph that one of the things happening in union these days is that the couples of today are not able to absorb the things their fathers and mothers were able to take during their time.

In her words, “The thing is that, marital problems are not peculiar to the entertainment industry. It's everywhere. Marriages, these days, are not like those days. A lot of things that our mother took and our fathers took; we women and men of these days will not take it. So, it's not synonymous to we entertainers.

“But what I have done, this is my second shot at it and I've taken it to God. I believe that marriage is a union ordained by God and I've decided to take my marriage to God so that He actually helps me. I think He's the only one who can give me the grace because the bible says a wise woman builds her home. And that wisdom actually comes from God.”