My marriage tale was not fabricated, I would get married soon…Derele Edun 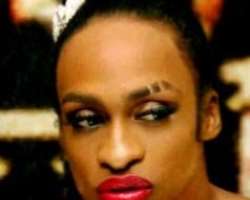 Derele Edun is well known for his weird outlooks and behaviors, aside that he is said to be a nice person.

The OAP is one of the most misunderstood people in Nigeria; his weirdness has earned him a lot of controversies.

He was once linked with Charly Boy allegedly as gay lover, he is allegedly widely perceived as a gay, as he is often dressed in female similar outfits.

Last year, the news of him getting married broke, it went viral, and lot of people didn't believe the story.

People saw it as a publicity stunt, saying the OAP was simply seeking for attention.

After a lot of hype, the rumor soon subsidized. In a recent interview with Punch, he revealed his marriage tale was not fabricated and he never meant to make noise about it, but somehow the news leaked and it went viral.

In his words “I will still get married, honestly, I was supposed to get married last year and I did not plan to publicize the whole affair. I intended to tell people few days to the day of the wedding so that they would come and find out who I was getting married to. But somehow, the news leaked and there was too much media hype around it. At a point, it began to look as if I fabricated the story to be in the news, but it was a real deal for me.”

After everything, the OAP is still ready to walk down the aisle with his woman. He hasn't clearly stated when it would be, but he claims it will happen soon. So we anticipate his wedding.

“I am trying to pursue the matter but I am not going to say when it would happen. When it's time, people would get the invite but I would not blab. I am going to get married in Nigeria, because I have realized that I am loved by all. I would not do a strictly VIP crowd because I would invite everybody who is interested in coming.” He said