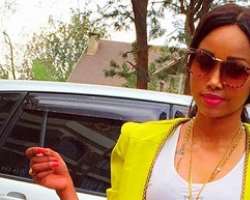 What in the world is former BBA star and Kenyan socialite, Huddah Monroe looking for in a man? She has suddenly become the queen of breaking men's heart. Last year the Internet was full of drama after Huddah publicly denounced Ugandan Tycoon King Lawrence, claiming that she was not dating even after King Lawrence providing evidence of them having an affair while on holiday in Dubai.

She brags as a heartbreaker “Never get back with your EX maybe just a one night stand. All my Exes are addicted to me...They keep running around in circles. I am like a drug addiction to them. They can't live without me”

She has been accused of hawking what her mama gave them for a living, something that she has denied over the years. She has been victim of cyber bulling that forced her to speak out “I, Huddah Monroe , I am known to live my life . I have no issues with anyone these days. Actually NEVER had issues with anyone unless you provoked me .HUDDAH has been the center of ridicule in this country for so many years now . Thank God for my THICK SKIN, if I was a weak person I would've committed SUICIDE long time ago because of CYBER BULLYING...”

On dealing with the men, she added “I have never been dumped though...I am always dumping till I get what I am looking for. Always having the upper hand in my relationships. No Controlla. When I move on. I never look back. It's throwing up and taking it back”