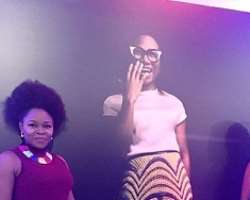 Nigerian-French singer, Asa, attracted so many celebrities to her mind-blowing 'Asa live in Lagos' concert, that was held at the Convention Centre of Eko Hotels, Victoria Island on Sunday, 1st of May, 2016 .

There was no dull moment especially when she performed 'Awe' and 'Satan Be Gone' immediately she mounted the stage. Then came when songwriter/music producer Cobhams Asuquo, who produced Asa's debut album, joined her on stage and they performed Beyonce's “Halo”, he played with the piano.

The attires chosen by these guests were cool. None of them arrived to look out of place. The red carpet was better imagined with the numerous pictures taken. Nothing seems to be lacking in this concert that must have taken the organizers time to plan. We love how the ladies showed up with attires that make fashion sense.