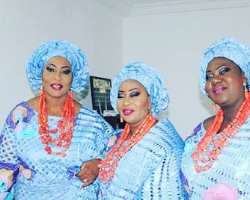 On Saturday, April 23rd, 2016, will always be a day to remember in the life of the Ooni of Ife, Oba Adeyeye Enitan Ogunwusi, as he buried his grandmother, Olori Mariam Ogunwusi in Ayegbaju Ile Ife, Osun State.

The king was represented by his wife, Olori Wuraola Itohan Ogunwusi, as the funeral service was well attended by family and friends.

The three sisters of the monarch Princess Folashade, Princess Adesola and Princess Adebimpe, stood out in royal blue lace while ensuring that everything was well taken care of.

Maybe due to the Ooni's youthful look, he has emerged as one of the most talked about king in recent times as he continues to make headlines each week that passes by due to various development works he is involved in.