Clarion Chukwurah had Her Wedding in Public, Pictures Emerge (photos) 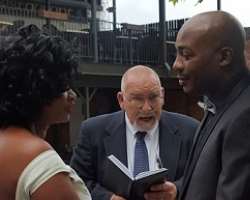 The actress had a quiet wedding to her new lover, Anthony Boyd, who is based in America and she was not ashamed about it as many have rumoured that the actress is older than her man.

She has gotten herself entangled in several unions which have failed and her recent marriage to Anthony makes it the third time she will give love another chance.

Chukwura once had a relationship with afro-juju legend, Sir Shina Peters who got her knocked-up in an affair that brought about the birth of musical video director, Clarence Peters.