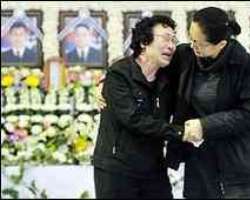 An official funeral has taken place for 46 South Korean sailors who died when their warship sank last month.

The ceremony at a naval base in Pyeongtaek, south of the capital Seoul, was the culmination of five days of official mourning for the crew members.

Investigators say the corvette Cheonan sank following a “close-range” blast which split the ship in two.

Many South Koreans believe North Korea sank the ship but Pyongyang has denied any responsibility.

A siren was sounded in the capital city to mark the beginning of the funeral service, taking place at the 2nd Fleet Command, the home port of the warship.

South Korean President Lee Myung-bak and his wife placed white chrysanthemums, burned incense and bowed before the framed photos of the soldiers, while buglers played taps.

The funeral is for all 46 sailors, including the six whose bodies have not been recovered.

I'm sorry we couldn't be with you until the end
Chief petty officer Kim Hyun-rae
Their families have asked that they be considered killed in action.

“We'll never forgive whoever inflicted this great pain on us,” said the navy chief, Kim Sung-chan.

“We will track them down to the end and we will, by all means, make them pay for this.”

In a eulogy, one of the survivors apologised to the dead crew for having left them behind.

“I'm sorry we couldn't be with you until the end,” Chief Petty Officer Kim Hyun-rae was quoted by Yonhap as saying.

“Though badly torn in half, the Cheonan hasn't vanished. The Cheonan was inscribed as history in the hearts of the people,” he said.

“We swear before you that we will make sure the sorrow that parted us from you won't happen again.”

Public suspicion
Ahead of Thursday's mass funeral, thousands of mourners had been lining up at altars across the country to honour the lost sailors.

What if North Korea was to blame?
Mr Lee visited one of the altars on Monday and wrote of the sailors' “lofty sacrifices” in a book of condolence.

The ship itself, now salvaged from the sea bed, is being examined just a few metres away by an international team of naval experts trying to find out what caused it to sink close to the North Korean border last month.

As well as the sense of grief there is a growing sense of suspicion, that despite its denials, North Korea may have been involved in the sinking, says the BBC's John Sudworth in Seoul.

Fifty-eight sailors were rescued after the explosion on 26 March.

A preliminary investigation said the explosion which sank the ship was external, fuelling suspicions of North Korean involvement.

Earlier this week the South Korean defence minister said that a torpedo strike was among the most likely causes.

So far the investigation team has said only that they have found evidence of an underwater explosion and it is not known whether fragments of any weapon have been discovered.

The two countries are still technically at war, since the 1950-53 conflict ended without a peace treaty.

Over the years there have been several naval clashes off the west coast of the peninsula, in the area where the Cheonan went down.