Ini Edo gets new partner…guess who 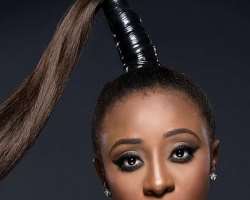 Nollywood actress Ini Edo is a brand to reckon with, as she has successfully stamped her feet in Nigeria's movie industry.

The actress is still very much relevant in the movie industry, and was one of the most sort after actress by movie producers.

Though she has allegedly being involved in few scandals… but she has successfully pulled through. The actress who use to be chubby later shed some weight, which triggered mixed feelings from her fans.

Soon after, she was unveiled as the brand ambassador of Slimtea, which shed light to probably the reason why the actress loss some weight.

Just when we taught she was the only ambassador, a new ambassador has being signed, and it's no other than, Annie Idibia, a fellow actress.

Annie who is a mother of two and a proud wife of music legend, Tuface Idibia has being quite excited on having this deal.

The Idibia family surely has something to celebrate as this week brought smiles on their faces,because both husband and wife got juicy endorsement same week.