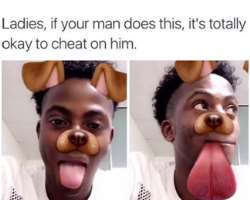 Not everyone is quite hilarious, or has the heart to be a subject of ridicule.

Mavins artiste, Korede is definitely not as hilarious as his boss, for he has no chill.

The singer couldn't stand being made jest of and he decided to react to the joke made of him.

He was pissed when a fan use a photo of him with dogs tongue and ears attached to it, tagging it as “if your man does this, it's totally okay to cheat on him.”

The singer apparently wasn't buying it at all, and he blocked his fan immediately.

This got negative comment from people saying, he over reacted as it was just a mere joke, which he took to the extreme.

Who knows, the artiste might just not be in a joyful frame of mind when such joke came up, or probably hates to be picked on.