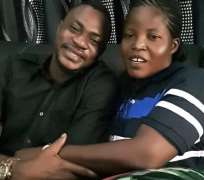 Recently, two Yoruba actress, kemi Afolabi and She-Baby were engaged in a messy fight, then the drama increased when they dragged prolific actor, Odunlade into it.

However, the actor denied the allegation, saying he was never involved with any of the actress.

The actor seems to be shaking all the happening off, as he celebrated his marriage 13th anniversary over the weekend with wife Ruth Abosede Odunlade.

He went on to plan a couple contest, aimed at celebrating couples who have been together for long through the thick and thin.

In his words: “Let's celebrate them because they had been through a lot and still stand against all odds. Let's celebrate them to encourage our young couples. Post a video of yourself with your partner testifying to the glory of God in your marriage, tag #odunomoadekola for repost. Two couples with highest number of likes will emerge as our winner. Entry closes on Wednesday, 20 April.”