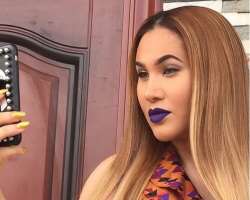 It seems it's not just Toni Payne but few others Nigerian celebrities are fully in support of Wizkid's lashing on Linda during their infamous scuffle.

Another star; Nollywood actress, Caroline Danjuma took to Instagram today, April 19, 2016 to throw shade at someone she calls a bully.

She wrote, "They never know what it feels like to be bullied and called a liar till it is done to them. Then they run around screaming,” the actress captioned a meme which read 'We can only make big impact from collective small efforts.'

Although, it is unclear who Danjuma is referring to but all this follows in the wake of Linda Ikeji's issue with Wizkid.

The blogger was recently called out by the 'Final (Baba N La)' singer for reporting falsely about him. And this led to a war between both parties. It finally took the intervention of the police to settle the rift.

Recall that Caroline Danjuma finally addressed the viral stories of how her billionaire husband has been cheating on her which most blogs reported.