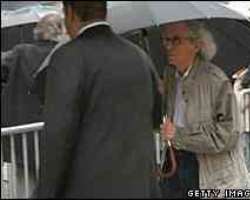 Christo attended Monday's service
Members of the art world have gathered to pay tribute to artist Jeanne-Claude at a memorial service in New York's Metropolitan Museum of Art.

The US artist, who worked alongside her husband, Christo, died last November as a result of complications following a ruptured brain aneurysm. She was 74.

Her dramatic installations included The Gates in New York's Central Park, which was seen by more than 5 million people.

The breathtaking project saw 23 miles of saffron drapes hung from a series of specially designed frames.

'Wrapping' installations
“I've had the honour of meeting many artists in my life, but Jeanne-Claude was perhaps the most passionate, the most meticulous and the most impervious to the word 'no',” Mr Bloomberg said.

“She was the kind of unique and vibrant artist who comes around only once in a lifetime.”

Christo and Jeanne-Claude have shown us what happens, what we can achieve, when we let go of the constraints that bind us and embrace our very best ideas

Christo, who attended the memorial, has vowed to complete the couple's unfinished works, including Over The River, Project for the Arkansas River, State of Colorado and The Mastaba.

The pair were well-known for their temporary “wrapping” installations, which saw them encase the Reichstag in Berlin, a Roman wall in Italy and a series of islands off the Florida coast with fabric.

The pair financed all their own artworks and never accepted any sponsorship.

“Christo and Jeanne-Claude have shown us what happens, what we can achieve, when we let go of the constraints that bind us and embrace our very best ideas,” Elizabeth Broun, director of the Smithsonian American Art Museum, told the crowd.

“They show us what it means to live completely freely, in debt to no patron, no sponsor, no ideology and really recognizing no authority in our lives beyond our own moral compass and personal vision.”

“It was an inseparable partnership of art and love,” said John Kaldor, who invited the couple to Australia in 1969 and helped co-ordinate their first major landscape work, The Wrapped Coast.

“Born on the same day, two people as one. They built on each other's success and strengths.”