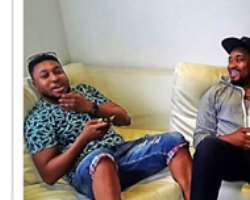 The actor and his friends, Nosa rex, shaggy Badaiki, were on their way to a function when the accident happened and led to their car badly damaged beyond repair.

Chuks and others though are still receiving treatments in the hospital; they still cannot believe their eyes that they could survive such accident which would have claimed lives.

He recently released some pictures of how they are doing in the hospital.