The Sound Of Victory Against An Army Of LawBreakers 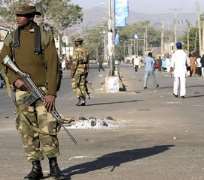 At the start of this week as events unfold itself, as the conversation ensues beyond mythical stick of silence of Nigerians, the thought of President Muhammed Buhari doing this for the soul of Nigeria glides over and over. At first, during his electioneering campaign, I use to believe the worm of corruption is more than bespectacled and cannot be cut open by anyone except holy Jesus.

Gore Vidal words will not navigate the thought when he says "By the time a man gets to be presidential material, he has been bought several times over". Until this growing activities of EFCC, anti graft agencies, members of DSS, Nigerian Army, and other true advocate of change decided to show up Mr President body language is totally against these thieves.

One of the many sit tracks of the conversation tarry with the style of administering issues by the defeated opposition party that ruled over our common patriarch for 16 years without a functional refineries that would secure the nation from any drought and gave balance to the economy of Nigeria. Meaning, the PDP are still bunch to overcome just by the poll. Isn't that what is playing in script of the ambition letting personality in the conversation? The basis of these issues has moved from blame games to PDP claiming ownership of what they never had.

The good thing is Nigerians are not unaware of the tracks, they just prefer to dance along or rather kill the music. And just like many analyst, one should not be shy wittingly from talking/discussing the tunes. It should significantly form our discourse. The fate of this nation in the hands of those adjudged maker of laws as it appears not to be their duties any longer is no longer safe. The importance of that duties is lost on alter of mischief, we didn't forget, APC leadership, the ruling party are not unaware that the common thieves still exist that would frustrate change from bitting hard. This the people grapples to hold on to before the expected growth and national developmental policies of PMB would light up the mood. But on overall, we have stop engaging and hurriedly stopped the conversation.

The change struggle of President Buhari started with a clearly stated stellar message, "I am for Everybody, I belong to No one" that is better captured that it is not going to be business as usual for oil thieves, corruption ridden individuals, Terrorists and those worm that has eaten deep into our system. Once that message is passed, the discerned, culprits and all the players involved in our befallen issues knew how bad is going for them, especially the ones that contributed half of their centurion to the reality of a new Nigeria. They had somewhat forgotten the place of history belongs to those who remember the start and the end of every stories. Therefore - the need to calve a safety nest arises from the dorm of fears.

First, ofcourse, nothing is impossible in politics, a negotiating attempt may suffice reading down through the spine of Nigeria's history. The intimidating political or financial hegemony of those cabals had not survived this far without hutches like this one way of the other. These men knows how to buy their way into the affluence of pardon or oversight. This cannot be said of the PMB Presidential determination to fight, and probably fights dirty if the needs be and this put him in one of the thoughts of George Washington moral maxim that says "lFew men have virtue to withstand the highest bidder."

It means by assertion that every conscience-less man have a price, until you find that out loosing the game is another certainty. Well, guess what? President Buhari won't flinch. He knew what corroborated his fall in 1983. It wasn't just his uniform men but the cabals he rose to fight without creating a seemliest escape route. It was like shooting his leg with an arrow despite his forthright determination to go after corruption. Yes, he have a heart. Not just that, it beats louder beneath his chest. PMB knows these rogues called leaders will settle for nothing but he chose to dine with them anyway. There are everywhere. Most influential these days are National Assembly. There agenda hasn't changed. To frustrate the purpose at which PMB is elected. Bad would be the second fall a man from a horse. He knows the game (politics) is dirtier but he has come with some sanitizer. An example has to be made wherewith, who cares!. Whereas, downplaying the swearing-in trick could trigger a soon to be hatchet on his Back. He got that fairly anyways and decided to play to gallery. Despite the much anticipation, unprinted name calling hedgy was his focal decisions.

The first but common betrayal infused shortly after the inauguration of the 8th Senate and the sickness of that won't go away in due course. The Saraki led group through the back door took senate leadership for reasons that are playing out carefully now. Every calculated attempt to have the ruling party wield the wedge was rubbished by the sworn mole in agent camp if anyone ask me. Each passing day on the power, despite in APC garment is working like the PDP. Apparently, the 3rd most exalted seat in Nigeria is a means to create escape route through any available means possible. The show - as crafty and beleaguering it has been never loose its taste not even the on going CCT trial of damning revelations will stop these people. Rather it will augur against every chance change have to be meaningful;- the sad thing is the trend of the conversation is gradually incoherent and dying. Nigerians in the rusty economic impasse are still suffering and smiling; 'man no go kill himself now'.

Just when we probably think it's getting fairer, Federal government shot at the sailing ship of the cabals had a gruesome hit, the CCT won't stop until Saraki sink except as I overheard he resign his position. What irk the federal government have not been settled, yes, the government won't be a bad loser to itself. So the need of another influx resurfaces: the budget is missing. The senate want us to hold on to that as distraction while they provide remedy or rather fight their way back into the market. What I don't know is how long these people expected to last in the tide of their gloomy investments and hardship of over 190million Nigerians? Do they care? The foreign bank accounts in nations of the world that have not been visited is another Salvador unnoticed.

Unfortunately, Prescient did it again. Panama leaks gave us something to chew and to hold on to corroborate our position of sinking corruption. The alibi was useful. It helps restore the greener light yet again we wont talk again. We should know continuous conversation over any anti people's policies is not negotiable. We just have to talk. Lawmaking power which is the soul of every surviving democracy is in the hand of the jesters and they won't let go. Why would they? Without a clean slate for them.....Prison or public ridicule under President Buhari is like hell. The impunity amongst change agents is a stark leash that won't go away.

Rattling round the revelations of the CCT case: I mean the one that help discovered the first ghost Governor in Nigeria history wasn't enough to pocket these miners. They also decided to go after Nigerians through the executive. Their sure card is simple; delay or pad the budget and blame it on executive recklessness. For a while, the people fell for this but it is no longer a dream. President Buhari and well meaning Nigerians must be ready, side-backing one another to defeat the high ranks Generals against change and the people. All loopholes and escape route MUST be blocked while the conversation continues.

Now that the evil forces are fighting mercilessly, it shows that the battle is about to be won. I have seen it all, from the crisis in the Petroleum industry, the power sector and now, the 2016 budget, I can tell Nigerians that this is the final kick of a dying man. The cabals in these sectors have been demystified and they are fighting their last battle.

The results will soon begin to manifest. President Muhammadu Buhari will not cede his role to others or allow anyone to hijack his government. Would he? This is the first reason many Nigerians stuck toes to him and canvassed for his presidency.

The battle is a fierce one, but the commander in chief is capable. Relax, tighten your seat belt. We are safe. The sound of victory is up in the sky. Someone is taking care of you. It is just some turbulence and we will get pass it because our pilot is on high speed.

Disclaimer: "The views/contents expressed in this article are the sole responsibility of Maxwell Adegbenro and do not necessarily reflect those of The Nigerian Voice. The Nigerian Voice will not be responsible or liable for any inaccurate or incorrect statements contained in this article."
Articles by Maxwell Adegbenro
21-2-2015  President Jonathan Is A Tragedy Of Democracy; Lustful, Evil, He Is A Choice We Can’t Take.