UNIPORT shut down as students protest hike in fees 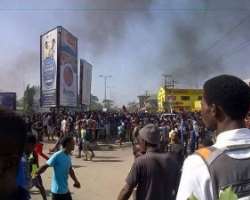 The University of Port Harcourt (UNIPORT) in the Rivers State has shut down by the  university senate following student’s protest over hiked fees.

Deputy Registrar in Charge of Information, William Wodi, said in a statement on Monday that  all students were asked to vacate their hostel accommodation before 6: 00 pm on Monday. The closure which takes immediate effect would remain in effect for one month, Wodi said in the statement.

According to him, students' union and their affiliate bodies have also been suspended till further notice.

There was commotion on Monday in Port Harcourt, as students of the University of Port Harcourt protested hike in school fees .

The management of the university had in 2015 adopted a policy which made tuition fee a prerequisite for student's participation in examination, a policy which compelled defaulting students to repeat an entire academic session.

The protest, which initially started on a peaceful note, later turned violent with the students in their hundreds, destroying school property.

The demanded the withdrawal of the policy, which they argued, was unfair to poor students.

The students blocked the East-West inter-state highway, causing heavy vehicular gridlock with the Police maintaining presence to forestall a possible breakdown of law and order.

One of the protesting students, who pleaded anonymity, told NAN they (students) took to the streets to disrupt examinations slated to begin April 11.

“The management placed a deadline for school fees payment and are now trying to enforce it before the exams.

“This action by UNIPORT to bar poor students who had defiled all odds to study and become responsible citizens to society is draconian and wicked.

“We will resist this attempt by the university management to victimise students whose parents could not immediately afford UNIPORT's exorbitant tuition fees,” the student said.

Another student, who gave his name simply as Biggy, vowed that students would remain on the road until UNIPORT's Vice Chancellor, Prof. Ndowa Lale, addressed them.

The student claimed that in spite of several hikes in fees, the university had remained under-developed under the present management.

Responding, the university Deputy Registrar (Information), Williams Wodi, told NAN that the protesting students destroyed his office and the Faculty of Science Block.

He said that the university management had given students several notices to pay their tuition fees before the examination scheduled to commence on Monday.

According to him, about 98 per cent of the student population complied with the no-fees-no-examination policy before the protest.

“We were patient and generous enough such that we shifted the policy implementation five times from November 2015 to April 7, 2016.

“The exam was scheduled to begin today (Monday), but protesting students have successfully disrupted the exams of which we are taking inventory of destruction on campus.

“The police are currently trying to contain the situation of which the rules of engagement is not to injure anyone but to pick up those who are ring leaders of the protest,” he said.

NAN reports that six students sustained injuries in a clash with policemen who came to disperse the protesters.

Thousands of the aggrieved students took part in the protest, in which they  laid siege to the school premises, blocking the Choba end of East-West Road in the Rivers State capital and stopping any academic activities from taking place in the university.

The students said  school authorities have been insensitive to their plight and vowed to intensify their protests until the management of the school responds to their demands.