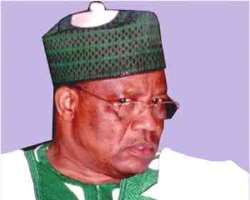 Gen. Ibrahim Babangida
The Attorney-General of the Federation and Minister of Justice, Mr. Mohammed Adoke

(SAN has asked the Socio-Economic Rights and Accountability Project for a signed copy of the Pius Okigbo panel report on the alleged misuse of the $12.4bn that Nigeria earned from the sale of crude oil during the 1991 Gulf War.

The request by the minister followed a petition on April 7 by SERAP demanding the prosecution of Gen. Ibrahim Babangida for allegedly presiding over the mismanagement of the sum.

Adoke's response to the petition was signed by his Special Assistant, Mr. Tunde Busari.

In the reply dated April 16, the minister assured SERAP, a coalition of 10 Nigerian civil society groups, that he would act on the petition once his demand was met.

Although SERAP welcomed Adoke's 'quick response' in a letter dated April 27, it said it believed that a copy of the Okigbo panel report which it sent to him as annexure to its petition was 'genuine and reflects the original one which is in the custody of the government.'

It said,' Your (Adoke) interest in this case demonstrates the willingness by the Acting President Goodluck Jonathan to exercise the requisite political will to translate into action his often repeated commitment to sanction corruption and tackle the impunity of perpetrators.'

The group said that if the minister was uncomfortable working with the copy of the report, he could get a signed one either through the cabinet office; members of the Okigbo panel or by way of subpoena.

The group said, 'Given that the Okigbo report is a public document, and the huge public interest to see justice done in the matter, we urge you (Adoke) to use your good office and leadership as the Chief Law Officer of the federation to obtain the original copy of the report from the cabinet office through the Office of the Secretary to the Government of the Federation.

'Also, some of the members of the Okigbo panel like Obong Ufot Ekaette, who is the immediate past Minister of the Niger Delta, will have original copy of the report.

'We believe that accessing or obtaining the original copy of the Okigbo report is a public function, which would be best performed through the Office of the AGF.

'In criminal matters like this, the government can also be asked to submit the original copy of the Okigbo report by way of subpoena.'

The group said it believed that 'pursuing the above suggested course of action will ensure that substance (and justice) prevails over technicality.'

SERAP also stressed that it understood that 'as a matter of law, former Military President Babangida is presumed innocent until found guilty by the court.'

It said, 'The fair trial rights of the suspect should be fully respected in any future prosecution. But we also believe that justice is a three-way concept: it should not only be justice for the suspect but also justice for the state and the citizens, who continue to suffer the debilitating consequences of the mismanagement of the $12.4bn.'

SERAP also argued that the mismanagement of the 'staggering amount has continued to undermine the value of the naira, precipitating underdevelopment and poverty, and impacting negatively on the living standards of millions of Nigerians, especially the most vulnerable sectors of society.'

The group added, 'We believe that, whatever its outcome might be, prosecuting the case and recovering any missing public funds would have significant implications for the fight against corruption in Nigeria.

'It will also send a strong message to the citizens and the international community that the Federal Government is capable of preserving the legitimacy of governmental activity.'

SERAP said that given the expressed interest in the matter by the minister, it hoped that he 'would pursue the case diligently and effectively.'

It, however, warned that it was 'leaving open, the possibility of taking all appropriate legal actions nationally and internationally, to ensure full compliance with Nigeria's voluntary international anti-corruption commitments, including under the United Nations Convention against Corruption.

The letter by SERAP comprises Access to Justice; Civil Society Legislative Advocacy Centre; Nigeria Liberty Forum; Women Advocates and Documentation Centre; Human and Environmental Development Agenda; Committee for Defence of Human Rights and Partnership for Justice was well as the Nigeria Voters Assembly; and Centre for the Rule of Law.