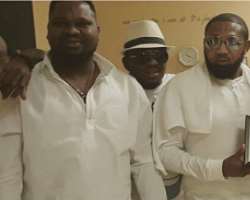 Yoruba actor and ex-husband to actress, Ayo Adesanya, Adeniyi Omogoriola Hassan, seems to have been a bit silent in the industry as he is more based abroad than Nigeria yet he is not slowing down in entertaining his fans across the globe.

He may have taken his craft outside the shores of the country but the handsome and bearded actor sure knows how to keep his fans updated as and when due.

The actor who is based in the US is currently working on his latest movie 'Complicated' which is being shot in Boston. Over the weekend, he premiered his much talked about movie 'Kowe' in Indianapolis, which brought friends and some Nigerians together to celebrate his hard work.

Aside the premiere, he was also awarded for his hard work put into promoting Nigerian culture through movies.