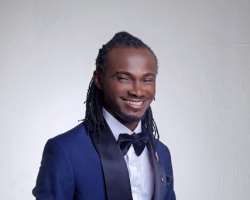 Godswill Chinedu Enyinnaya also known as Mega B is a Nigerian artiste, song writer and producer, who hails from Abia state, Nigeria.

Born on February 20, into a family of 11, including his parents, Mega B is the 6th child of his family. He had his secondary education in Senior Science School, Ndo-Eyo, Akwa Ibom and further went to Lagos state Polytechnic, where he studied Computer Engineering.

After working in the IT world as a computer analyst for a while, he decided to make a career out of his passion, music. And so in 2003 he debuted into the world of music. Being a perfectionist, he worked tirelessly in the studio and finally released three (3) hot singles between 2013 and 2014 respectively, titled: “THE WAY YOU LIKE IT”, “ARARARARA” (both produced by Cheepho) and “Top Up” which was produced by D’tunes, which garnered massive airplay. Ever since then, he has not rested on his oars.

Mega B who is signed to Pronic Entertainment under the music management, Sapphire Nation has five (5) videos to his credit. His genre of music is eclectic and every of his track exposes his versatility and dexterity. .

Right now he is working on more singles and videos and hopes to release his debut ‘album’ before the end of the year 2016.

Mega B who gets his inspiration from God and from events around him, hopes to collaborate with a lot of artistes, both locally and internationally. He is also very much inspired by Flavour, P square, Davido, P Diddy, Usher, Akon as they inspire his music.

He loves music, driving and very real people and totally dislikes unreal and lazy people, this is evident in his work ethics and his kind of music.

His hobbies include: singing, driving, meeting new people which makes this very much ‘single’ artiste, an extroverted person.

His view on the Nigerian Entertainment industry is much that he sees our local acts taking over the world soonest and his advice to the up-and-coming acts is consistency and resilience…..with that, they will go a long way.

His personal mantra is, “have a positive attitude, work hard and believe strongly in your crafts”.