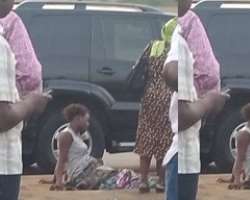 Report emanating has it that a woman, who was part of some Lagosians that woke up very early to queue for fuel before 7:00am, was seen in labour.

According to the report, a pregnant woman suddenly went into labour early morning today, before at Anthony bus stop taxi Park by VIO/LASTMA office, Lagos, but fortunately for her, some women who were around with their wrappers decided to help take the delivery while some people were calling the emergency ambulance.

With the woman in labour, those on the queue forgot about their mission that early morning as they tried to ensure that the young mother and the baby are safe.