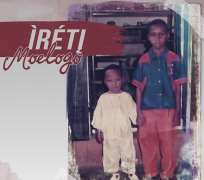 On the back of a breakthrough 2015, which culminated in him being nominated for ‘Best African Act’ at the MOBO Awards, and ‘Diaspora Artist of the Year’ at the NEA Awards, with collaborations with Tinie Tempah, Wretch 32, Avelino, Sneakbo, and Geko among others, British Nigerian Afrobeats artist Moelogo is proud to debut his long-awaited highly anticipated sophomore EP titled Ìréti, premiered via The FADER.

Speaking about the inspiration behind the EP, Moelogo said, “Ìréti is about one thing - hope. Hope and belief in my abilities as an artist, despite the many setbacks; hope that my talents will get my family and I to a better life; hope and faith in God; hope that if I continue working hard, all my dreams will come true; searching for hope in a world filled with doubt and despair”.

From Moelogo’s first foray into the UK music landscape in 2013 with the BBC 1Xtra-playlisted ‘Pangolo’ and his critically acclaimed debut EP, to his 2014 underground hit ‘The Baddest’ featuring UK rap icon Giggs, to his partnership with Island Records last year, Moelogo is one of the most exciting artists coming out of the UK, fusing his African heritage into British urban music to glorious effect.