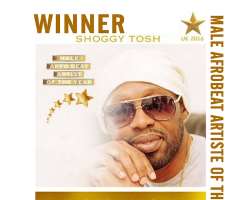 Shoggy Tosh won his 3rd music gong in 2016 and his 6th in 18 months at the 2016 Gospel Xplosion Music & Media UK Awards as the Afrobeat artist of the year. The awards event spearheaded by award-winning reggae gospel artist, Annette Bee, returned for its second Music Awards at the National Motorcycle Museum in Solihull, West Midlands in the United Kingdom on Easter Saturday, 26th March. It's sole objective is “bridging the gap for unbelievers, and highlighting to them how good God is, by using the various gifts that God has blessed each minister with”.

Born in Birmingham, United Kingdom on 9 January 1974, Shoggy Tosh is a multi-award winning publisher, producer, author and television presenter mentored by Rev. Tim Omotoso. He is the founder of The Official Stars Homepage Magazine, TV & PR and also a British/Nigerian rapper. He ventured into music two years ago after Rev. Tim Omotoso spoke into his life way back in 2003. On 9 January 2014, he released his debut rap single, "emujow" featuring Shady Blue and Jamaican gospel dancehall star, Dunamis Reignz and produced by Pastorchild. Shoggy Tosh's latest release, 'Pamoto' featuring Henrisoul and also produced by Pastorchild has over 161,000 downloads on My Not Just OK and the music video directed by Femi Best Touch has over 41,800 views on Vevo. Pamoto was also the #1 song for 7 consecutive weeks on Top 10 Gospel Chart - ITV Radio 92.3FM Benin, Edo State. Nigeria [1 Nov - 6 Dec 2015], #8 on UK Christian Chart - November, 2015 & currently #5 on African Music Countdown - The Drive Charts - Spirit 96.6FM Uganda [25/3/2016].

Asked for his reaction after the win, Shoggy Tosh had this to say: 'Thank you Jesus. This is starting to freak me out. Now I feel what Mario Balotelli meant when he scored that goal for Manchester City against Manchester United & said, 'Why always me?'. I am bamboozled right now. I did not even know of the nomination nor the voting.

Thank you to whoever nominated me & thank you for the voters. This is my 6th music award in 2 years, and 3rd music award in 2016. Mind Blowing stuff! I am enjoying the glory upon my mentor's life - Rev Tim Omotoso.

The awards was founded by Annette Bee in 2015, with a vision to showcase and celebrate some of the great work being done in the UK Gospel scene. She had this to say about Shoggy Tosh's win as the Afrobeat Male artiste of the year, 'CONGRATULATIONS Shoggy Tosh. The People Have Spoken "It's The People's Choice" CONGRATULATIONS once again'.