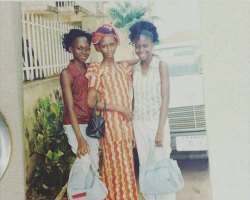 There was a time Cynthia Morgan used to have a dark skin tone. We are talking about 15 years when she was so innocent and not known in the country, long before Jude Okoye signed her in.

Music actually began at the age of seven for Cynthia. She started in the children's choir, after which she moved to the youth choir and later joined the Christian Union choir. She began putting out music at the age of 16 and recorded a six -track demo album. Cynthia released her debut single with General Pype titled 'Dotty Stepping' at the age of 17. In 2012, she met Jude Okoye in Atlanta; he appreciated her talent, took an interest in her career and signed her to his label, Northside INC.

Can you spot her in this picture? Cynthia is pictured *first left* with friends.