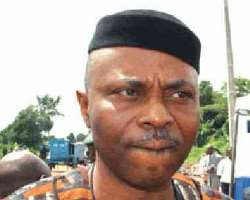 Ondo State Governor, Dr. Segun Mimiko
The Ondo State Government on Sunday descended heavily on former President Olusegun Obasanjo over a statement credited to him that the Peoples Democratic Party must capture Lagos and Ondo states in the 2011 elections.

Describing the statement as 'inflammatory,' the state government said it was not only an affront to the people of the state but one unbecoming of a supposed elder statesman.

Obasanjo, who is the Chairman, Board of Trustees of the PDP, had on Saturday in Osogbo, Osun State, urged the leadership of the party in the South-West to work hard and capture Ondo and Lagos states in the 2011 elections.

But in a statement by the Chief Press Secretary to the state Governor, Mr. Kolawole Olabisi, in Akure, the state capital, on Sunday, the Ondo State government expressed dismay at the directive of the former President, saying that it was an uncharitable remark that depicted the people of the state as animals capable of being captured.

The statement noted that the people of the state had resolved that never again would rigging, coercion and snatching of ballot materials at gun-point be allowed to hold sway as was the case in the 2007 elections.

The statement reads in part, 'We view with utter shock the remark credited to Chief Olusegun Obasanjo and we are aware of the import of such remark given the events in the recent past.

'The remark is not only uncharitable but unbecoming of an elder statesman as the good people of Ondo State are not animals that could be captured and caged at will as being insinuated by Chief Obasanjo.

'The whole world is aware of what transpired in the build up to the 2007 general election and the subsequent rigging of that election by the PDP and the prayers of the people of Ondo State, who stood by us for 22 months during which we sought the instrumentality of the judiciary to wrest our God-given mandate from the PDP.

'Our votes must count and never again will anybody rig election in our state; the best candidates must be allowed to be chosen irrespective of party affiliation.

'It is with this in mind that we view the remark of the former President as grave and one that should not be treated with levity.'

The statement, therefore, called on all Nigerians and the whole world to be aware of another grand plot to unleash violence in Ondo State and urged security agents to take up the issue with all the seriousness it deserved.